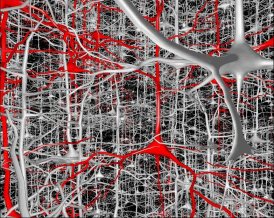 Information science has been a major driving force of the economical and social development in the 20th century. Based on the ingenious concept of Alain Turings universal computing machine and the availability of semiconductor based transistors, the IT industry has been able to follow an aggressive roadmap of ever increasing performance according to power laws like the well known Moore's Law. It appears to be a matter of time only until computers will eventually reach the capabilities of the human brain.

Upon closer inspection, however, the brain is dramatically different from conventional computers. The differences are not only due to the use of biological tissue rather than silicon but also in terms of the computing architecture. The brain is not composed out of highly specialized and separated building blocks like a microprocessor but exhibits a rather uniform structure. It does not use Boolean operations like ANDs and ORs to perform logical operations on well defined stable states but involves the dynamics of transient states to code and to process information. Maybe most importantly, there is no engineered software to deal with pre-defined situations. Instead, the brain is based on a huge number of truly massively parallel non-linear processing elements (neurons), a very high connectivity (synapses) and self-organisation (learning, plasticity).

The FACETS project aims to address the unsolved question of how the brain computes with a concerted action of neuroscientists, computer scientists, engineers and physicists. It combines a substantial fraction of the European groups working in the field into a consortium of 15 groups from Austria, France, Germany, Hungary, Sweden, Switzerland and the UK. Since September 2005 more than 80 scientists join their efforts over a period of 5 years. A project of this dimension has rarely been carried out in the context of brain-science related work in Europe, in particular with such a strong interdisciplinary component.

Browse through this area to learn more about the

A sample collection of press coverage is available in the