This workpackage concerns the design, analysis and testing of models of neuronal networks. FACETS gathers a large number of different laboratories across Europe, and many of those groups are directly involved in desiging simulations of network of neurons, in particular of cerebral cortex. The workpackage WP5 has been subdivided into different tasks who covers respectively the equivalence with hardware (Task 1), the design of "generic" cortical networks to match in vivo measurements of active states (Task 2), the design of networks of the primary visual pathway (Task 3), the role of plasticity at the network level (Task 4) and the development of appropriate software resources (Task 5). We report here about the results of Tasks 1-3, and 5 (Task 4 is only beginning now).

Task 1 aims at bridging the gap between experimental data at the network level (WP3) and modelling approaches, so that the results from in vivo experiments can be directly addressed using hardware approaches (WP6, WP7). Collaborative modelling and hardware investigations have established the equivalence between spiking neuronal networks, either simulated or emulated (using the hardware). The first generation of hardware systems has been thoroughly tested and work is under way towards the 2nd generation.

Task 2 aims at exploring the genesis of states of activity consistent with in-vivo measurements (see Fig. 1). To this end, the data from intracellular and extracellular measurements during active states are analyzed and quantified using different statistical measures. Generic networks of excitatory and inhibitory neurons are constructed and the activity of these networks is compared to experimental data, using the same analysis tools (see Fig. 1). In particular, we are looking for "active states", which consist in irregular and apparently stochastic activity. A number of generic models of "active states" have been investigated, based on in vivo experiments. The different models developed by different groups have been compared to the available experimental data (see deliverable D16, 6.7MB pdf). 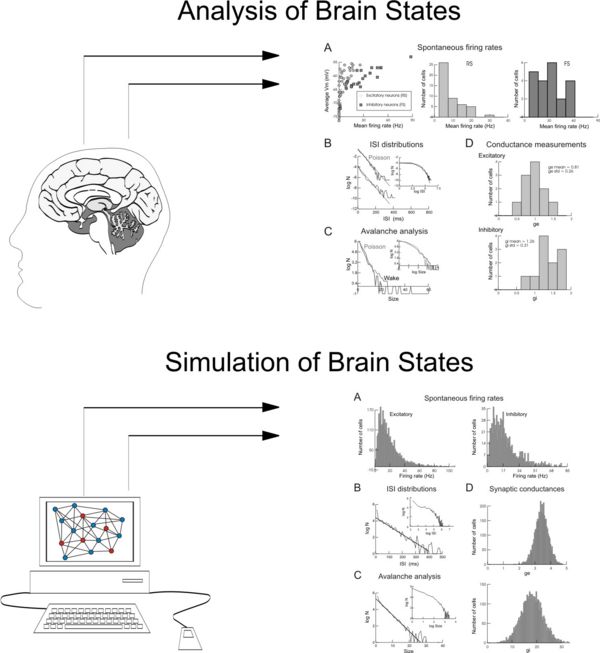 Figure 1: Schematic of the approach followed in the design of network models of active states. Top: the activity recorded in vivo using different means (intracellular, extracellular) is analyzed statistically using different methods. Bottom: Generic network models of cerebral cortex (excitatory and inhibitory neurons, randomly connected) are simulated numerically, and the same statistical tools are used to analyze network activity from the models, then compared to experimental data. A detailed report of this approach is available in deliverable D16 (6.7MB pdf).

Task 3 aims at building network models of the sensory neocortex, including top-down influences coming from higher cortical areas to V1 and from V1 to thalamus. Several models of primary visual pathway are currently being developed. These include the retina, the thalamus (LGN-PGN) and primary visual cortex (V1). We will explore low-level biological paradigms such as the emergence of functional selectivity in receptive fields of V1 cells.

Task 5 aims at developing appropriate software resources for performing common network simulations. FACETS is one of the largest consortiums ever gathered to have very different modelling communities interacting on a common project. It is therefore essential to develop tools to enable different types of models to communicate and to establish a common format (see also WP8). Such a format is currently being developed and it is our goal to produce all models in this common format. There has also been significant development of software resources for simulating neuronal networks and obtaining a common interface to all simulators used within FACETS. A review paper about simulators is in preparation, to which many modelling partners of FACETS are contributing.

Finally, one of the deviations from the initial plan stated in the proposal was about the investigation of "macroscopic" models of cortical activity. We realized that such models are necessary to establish the connection with imaging data, and we are presently examining different ways of obtaining such models.