Research in WP9 investigates emerging computing paradigms, based on detailed biological data that are collected in other workpackages.

A detailed model of a generic cortical microcircuit has been assembled, and its computational properties have been examined through extensive computer simulations. 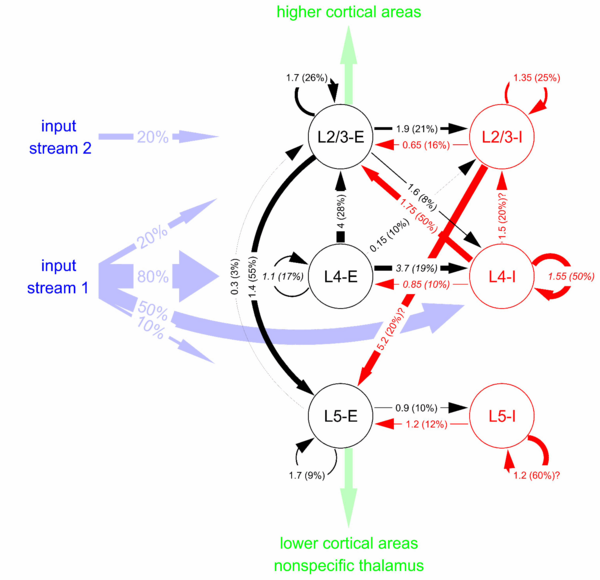 Figure 1: Cortical microcircuit template. Numbers at arrows denote connection strengths (mean amplitude of postsynaptic potentials, PSPs, measured at soma in mV) and connection probabilities (in parentheses) for connections between cortical neurons in 3 different layers, each consisting of an excitatory (E) and an inhibitory (I) population, with an estimated maximal horizontal distance of 100 μm. The experimental data was assembled by ULON [Thomson et al., 2002]. Most of the data are from rat cortex, except for interconnections in layer 4 (italic), which are from cat. Percentages at input streams denote connection probabilities for input neurons. In addition each neuron receives background noise reflecting the synaptic inputs from a large number of more distal neurons. (large image)

In particular, its computational properties have been compared with a number of control circuits that have the same number of neurons and synapses, but are missing some of the finer details of cortical microcircuits, such as a laminar structure, the small-world property of its connection graph, or the inherent short-term dynamics of synapses. It turned out, that all of these finer details of cortical microcircuits have a significant impact on its computational performance. This analysis has been carried out on the basis of the "liquid computing paradigm" [Maass, Natschlaeger, Markram, 2002], where the circuit does not have to be specialized for any particular computation task, but is viewed as generic preprocessor for neural readouts (e.g. projection neurons), that extract particular information for particular tasks from the circuit. The results of this study have been published in [Haeusler and Maass, 2007].

Larger models of cortical circuits are also constructed and tested in this project, with the goal to construct a model for a few millimeters of area V1. Different neural simulators are used for that purpose (SPLIT, NEST, PCSIM), but with common interfaces. The validity of the dynamics of these models is tested through comparisons with neurobiological experiments.

Figure 2: Model of a V1 hypercolumn. A: Generic cortical microcircuit template as shown in Fig. 1. B: Extension of the generic circuit model to a V1 hypercolumn by incorporating isotropic and non-specific lateral short range connectivity as found in cat primary visual cortex. Receptive field properties of cortical cells were implemented according to [Troyer et al. 1998] with parameters taken from Teich and Qian [Teich and Qian 2006]. (larger image)

Finally, general properties of computations in large neural circuits, in particular the computational impact of of different types of random connectivity graphs, as well as the potential computational role of spontaneous activity and other dynamical states are examined in this WP 9. For example, common hypotheses that cortical circuits operate in a critical dynamic regime were examined on the basis of neurobiological data, and found to be incorrect [Bedard et al, 2006].